Annual Host of the Trail of Tears Commemorative Motorcycle Ride 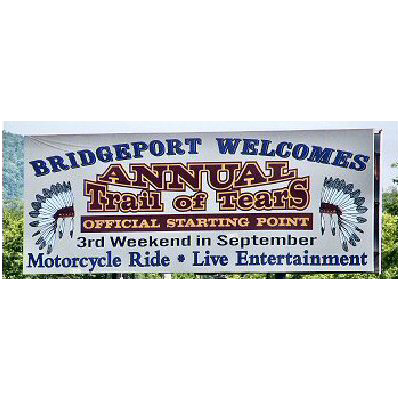 The Bridgeport Trail of Tears Committee

is committed to raise awareness and money to support the Trail of Tears history in and around Bridgeport area.

Bridgeport played an important part of both the River Route and the forced overland route of the Trail of Tears.   From May 23, 1830 the deadline and start of the U. S. Government round-up of all the Cherokee Tribe that had not moved west with the tribe that signed the Treaty of New Echota and moved with the 600 Cherokee that followed John Ridge and Elias Boudinot also known as Buck Waite left this area and followed what is now Highway 64 from Chattanooga to Oklahoma.  This Trail of Tears Route is known as the Traitor Route or the Bell Route.  The people that signed the Treat of New Echota sold out the over 17,000 Cherokee that followed Chief John Ross and created a hostile environment with in the Cherokee Tribe.   This caused the people that followed Chief John Ross to execute Ridge and Boudinot when they were forced to move to the Reservation in Oklahoma in 1839.

Bridgeport was where over 5,000 Cherokee were forced to remove by flat boats down the Tennessee River to Oklahoma.  When the Tennessee River got too low to travel by flatboats, due to a drought in June of 1838 and the U. S. Government decided to relocate 1,070 Cherokee west to Waterloo, Alabama to be taken the rest of the way by steam boat to Oklahoma.  This group of 1,070 Indians were forced to march from Ross’ Landing in Chattanooga through Bridgeport to Waterloo, Alabama and then on by boat to Oklahoma.

The overland march was harsh when the Cherokee arrived in Waterloo they were all in miserable condition.  Bridgeport where they passed through and camped out very near here.