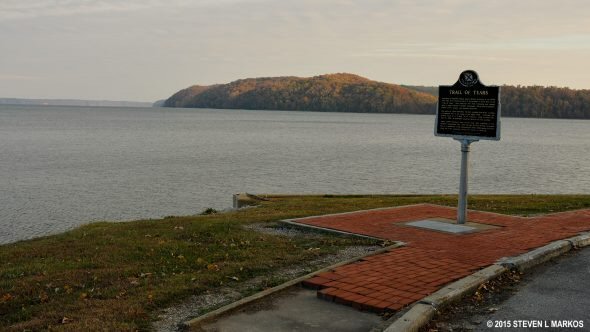 Why is this monument here?

In May 1838 soldiers, under the command of U.S. Army General Winfield Scott, began rounding up Cherokee Indians in this area who had refused to move to Indian Territory in Oklahoma. About 16,000 Cherokees were placed in stockades in Tennessee and Alabama until their removal. Roughly 3,000 were sent by boat down the Tennessee River and the rest were marched overland in the fall and winter of 1838 – 1839. This forced-removal under harsh conditions resulted in the deaths of about 4,000 Cherokees.

In late June 1838, a party of 1,070 poorly equipped Indians was marched overland from Ross’ Landing at Chattanooga, Tennessee, to Waterloo, Alabama, because of low water in the upper Tennessee River. Following the general route of present-day U.S. Highway 72 they camped at Bellefonte, where about 300 escaped between Bellefonte and Woodville. On June 26, the remainder refused to proceed. Consequently, the militia, under the command of Army Captain G. S. Drane was tasked to mobilize the group and escort them to Waterloo. Arriving in miserable condition on July 10, 1838, the Cherokee were placed on a boat to continue their journey West. Historical documents show that this group of Cherokees camped for two nights near the Flint River, close to what is now Madison County High School.

Since the waterloo site has such significance in the entire story of the trail of tears ATTOtcai decided that a monument should be erected here that tells this story and brings attention to the landing at waterloo. phase 1 of the monument project was to decide what sort of monument should be erected, its location, and all of the details of its design and significance. the members of attotcai moved swiftly to decide all the details and defined that the monument should be completed in three steps. The first step would consist of a retaining wall that would stop the erosion of the point and proudly proclaim its purpose with the marking of 'The Trail of tears' on the wall. the second step would be the erection of a historic marker that would provide a summary of the significance of the landing, surrounded by a pavement consisting of bricks marked with the names of contributors to the 'River walk pavement'. And the third step would be the erection of a statue paying tribute to the trail of tears.

the retaining, wall finished in 2006

the landing point was being slowly eroded by the lake and it was necessary to build a retaining wall that would stop the erosion and ensure that the monument would remain in perpetuity. The retaining wall declares this site as a monument to the trail of tears.

the historic marker and pavement, under construction

the paving bricks that surround the historic marker and that will surround the statue that will come in phase 4 are marked with the names of those that contribute to the riverwalk monument. The funds raised by the sale of these bricks will be used to have the statue produced and placed at the monument. the photo above shows the current stage of production.

How can you contribute to this monument?

you can play a significant role in remembrance!

take this opportunity to buy a brick and declare your support by helping to construct the memorial statue honoring the native Americans removed from their homelands and forced west along the infamous trail of tears.

Next: the tahlequah plaque